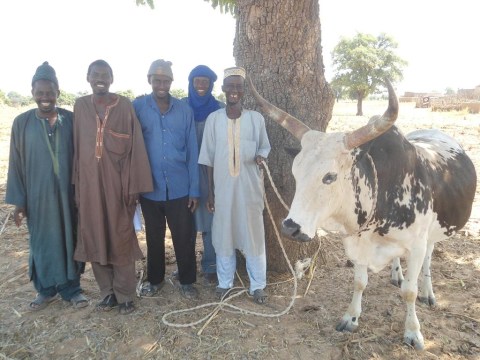 A loan helped to buy oxen to resell in order to support his family.

His name is Bouacar, the one holding the rope in his hand tied to the ox in the photo. He is Malian and resides in the village, aged 64, married and father of 8 children, including 2 boys and 2 girls in school.

Bouacar raises oxen, his activity consists of buying lean oxen, fattening them for a few months and reselling them profitably. After each sale Bouacar can have a profit of 60,000 FCFA per head, part of which is invested in the family's needs (food, shoes and in the home).
He has been in this business for more than 10 years. He buys his oxen at the market and sells them in his village. As part of improving his business, he used the RMCR to get a loan.

Bouacar's dream is to buy bicycles for his children and grandchildren, to support all his family's expenses and to be a prominent oxen raiser in the region.