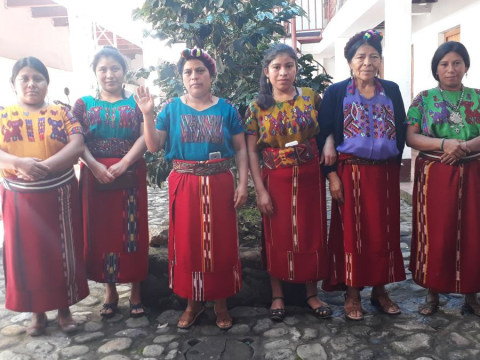 Las Fresas 2 Group's loan finished fundraising, but these other borrowers need your support

A loan helped to expand her thread shop, buying thread, crystal wool, second wool and lustrina, all in different colors.

Juana is 38 years old. Her father was a peasant and her mother sold fabric. Her parents gave her the opportunity to study. She began late and studied to the sixth grade. However, she could not continue studying because, at that time, her parents could not support her anymore. She was a weaver in her parents’ home, married at the age of 17, and has four children.

She has gotten eight loans, all of which have been used to start and expand her thread shop. This year, she will expand her shop by buying thread, crystal wool, second wool and lustrina, all in different colors. Her loans have helped with her family's expenses and supported her children's studies.

Juana is the leader of Las Fresas 2, the group is composed of five women, all from the Ixil Maya ethnicity. The group's loan will be divided to be spent 17% on textiles, 49% on retail, 17% on agriculture, and 17% on wholesale. On average, each member of the group has five children. The average age of the group members is 36 years old. 32% are illiterate, 17% did not finish primary education, 17% completed primary education, 17% studied to the eight grade, and 17% studied to the ninth grade.