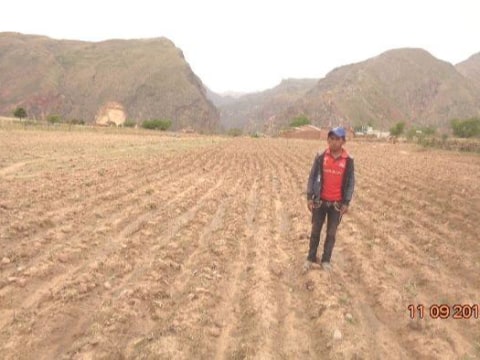 Juan's loan finished fundraising, but these other borrowers need your support

A loan helped to construct irrigation canals and to buy tools.

Juan is a 27-year-old man, entirely devoted to his work. He lives in a family home in the Tirina community in the municipality of Betanzos in the province of Cornelio Saavedra in the city of Potosí - Bolivia.

Farming is the main productive activity of the families from the municipality. Juan reserves a large part of his output for his own consumption and only sends 5%, on average, to be sold in the closest markets such as Potosí, Betanzos, and Sucre, or local fairs. Some of these products, such as potatoes, are turned into freeze-dried potatoes; Juan grows potatoes and broad beans. In order to have a good output, he works every day from 8 in the morning until 6 in the evening, and he goes to market on the weekends.

This is the first time that Juan has asked for a loan, and he is asking for it with the goal of constructing irrigation canals and to put it towards, also, the purchase of new work tools.

His personal goal is to improve his output and to be one of the principal distributors of potatoes and broad beans in the region. In this way, his income will improve, and he will be able to build his own house.