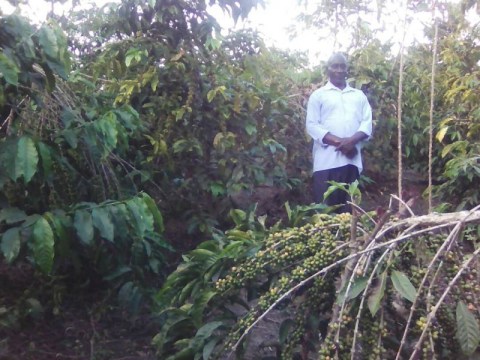 Matia's loan finished fundraising, but these other borrowers need your support

A loan helped to buy fertilizers and pesticides for his coffee plantation.

Matia, aged 56, is a resident of Kyotera. He is married with six children and two dependents, who are his grandchildren.

He is a farmer majoring in coffee growing, which has been his main source of income since 2000. He earns a living through supplying the coffee to processing factories. Matia has been able to look after his family and pay his children's school fees with the money he gets from farming. He also managed to set up a small retail shop, which is run by his wife. The extra income earned from this side business helps out with the daily family expenses.

Matia has always wanted to apply improved methods of farming, but inadequate capital has always been his major constraint. He has approached UGAFODE for a loan of 2,000,000 UGX to buy fertilizers and pesticides for his coffee plantation. Matia is hopeful that his yields will improve both in quality and quantity, which will increase his income.

Matia is grateful for support from Kiva because it will improve his family's livelihood in the long run.