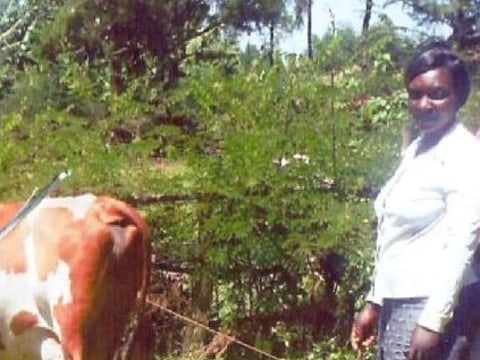 Emmy's loan finished fundraising, but these other borrowers need your support

A loan helped a single mom to purchase farming inputs such as fertilizer and hybrid seeds to boost the quality of her produce, earn more profits, and elevate her living standards.

Wonderful Kiva lenders, pictured above is Emmy, a 32-year-old single mom of four children and an inspiring farmer who lives in Kericho, in the Rift Valley area of Kenya. Among women of her age, she has been identified as a very hardworking farmer, engaging in mixed and dairy farming.

Emmy is a mother who loves attending to her daily duties and making a living for her family. She uses the minimal profits from selling milk and crops locally to pay for her children's school fees. However, the quality of Emmy's crops has dwindled due to the use of poor farm inputs. This has brought about low demand for her crops and has negatively impacted her sales.

Since Juhudi Kilimo, which is in partnership with Kiva, ventured into the affairs of smallholder farmers in Kenya, farmers can attest that there has been a significant improvement in the availability of inputs. Emmy is assured of a bumper harvest, which will open new markets for her crops and, subsequently, increase her profits. This will elevate her standard of living, as well as that of her beautiful children.