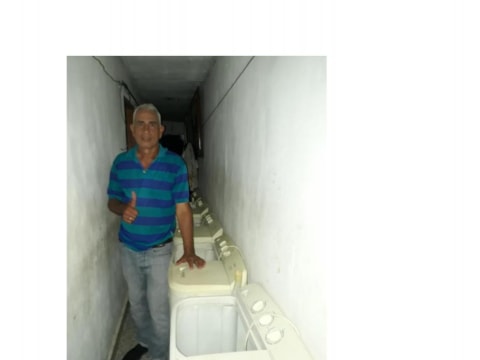 Octavio's loan finished fundraising, but these other borrowers need your support

A loan helped to buy four washing machines and parts to maintain them.

Octavio, 60, is a micro-entrepreneur who lives in the city of Barranquilla. He's married and has three children.

He opened his washing machine rental business thanks to some capital he saved, and with great effort, dedication, and drive. This merchant bought several washing machines and offered them for rental to his neighbors, family members, and people in the area. He has managed to build customer loyalty because of his efficiency and good service.

Currently he's applying for a Kiva loan, his first financing from Fundación Mario Santo Domingo. He'll invest the money in a purchase of four washing machines and parts to maintain them.

This entrepreneur needs capital to strengthen his business. Octavio thinks the key to his business is responding opportunely to clients' requests so he has greater productivity and an increase in his income.

He hopes to spend his old age at the side of the woman he loves so much, his wife who has been his loyal companion.

Support him in his loan; it will be a success.