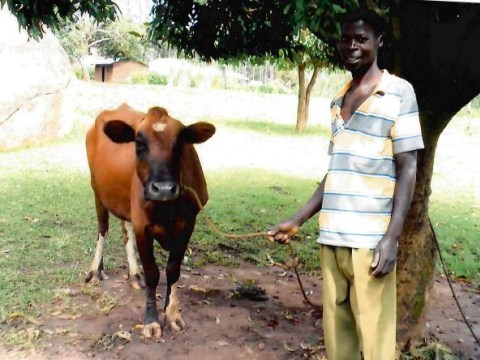 Benard's loan finished fundraising, but these other borrowers need your support

A loan helped to purchase farm inputs (hybrid seeds and nutrient-rich fertilizers) and diversify his production to make more profits and meet the basic needs of his family.

Benard is a father of five children and one of the most hardworking men in Bungoma, a remote area located on a gentle plain before the ascent into the Western area of Kenya. Because of how much Benard likes farming, he has even nicknamed his cows. They make him a very proud farmer, especially when he is milking them.

In Kenya, agriculture is one of the most competitive industries, especially due to the high costs of operations necessary to improve farming. Such costs include the cost of land acquisition and inputs, which have continually increased. To meet the high costs of inputs, farmers have been forced to borrow from financial institutions, which sometimes impose very complicated procedures in loan distribution. Some farmers end up hopeless and despondent and lack the morale to invest in agriculture.

In a bid to expand his farm, Benard is seeking a KES 30,000 loan to purchase farm inputs (hybrid seeds and nutrient-rich fertilizers). Expansion of the farm will mean diversifying his production, and thus he will be able to grow many varieties of crops. Increased output on his farm will lead to greater profits, and thus Benard will be able to meet the basic needs of his family. He is an enterprising man who wishes to establish a bigger agribusiness farm in the future