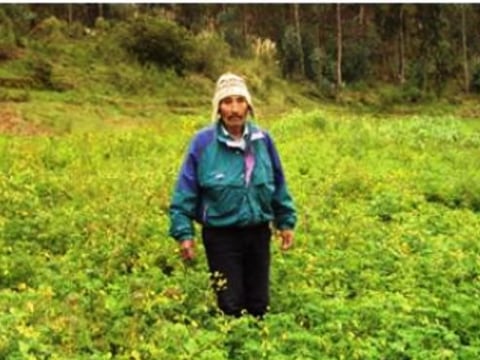 A loan helped Purchase of organic fertilizer and potato seed.

Señor Martiriano A. C. is 54 years old and has been married to Señora Victoria Zapata López de A. for more than 30 years. He has a total of 9 children of whom 5 are married and 4 are still students dependent upon him.

The gentleman is engaged in the production of potatoes, beans, oca (an edible root), and papa liza (a tuber grown in the Andean region). He sells his crops at the weekly market in Colomi. His wife helps him with agricultural production, in addition to being a housewife and caring for their animals.

Señor Martiriano A. C. lives in Colomi on Cbba Street in the southern zone of the town a half block from the municipal stadium. It is an area which is within the housing development in the town of Colomi. He will use the loan that he is getting from CIDRE for the purchase of organic fertilizer (poultry droppings) and potato seed in order to in order to increase his agricultural production.

Señor Martiriano A. C. tells us that his dreams are to continue improving his economic resources so that his children can continue studying until they become professionals and also to improve his quality of life so that he can live more comfortably with his family. Finally, he tells us that he wants to increase the amount of land that he has under production because his crops are the most important for Bolivian family pantries and, at the same time, are an economic resource for maintaining and feeding his family.