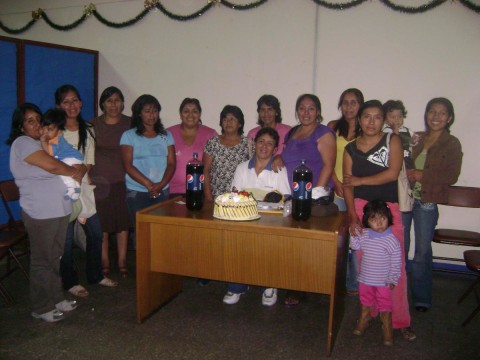 Luz D. San Antonio The 12 members of this communal bank are very enterprising and responsible. They have demonstrated this during the nine cycles in which they have worked with Edaprospo. Their prime objective, among others, is to give their loved ones the best. They put forth great effort everyday in their businesses in order to reach their goal. What follows is Nancy’s story. Nancy is 31, and she has three children. With a husband who gives her all of his support, she started in the world of business. Since she was very young she has sold tripe as a traveling vendor and prepared food for some of the “motocarro” (three wheeled motorized vehicles) drivers. It was through these drivers that she found out that the motocarro business was profitable. She then decided to get a motocarro with the income from her sales and what she could save from her husband’s salary. That way they rented one. When she saw that this business was profitable, she decided to buy another motocarro. She later came to have two more. When she saw the need for an immediate loan, she did not know where to go. It was through a neighbor that she found out about the benefits that Edaprospo offers. She used her first loan for the maintenance and operation of her motocarros. Thanks to the loan with Edaprospo, her income was improving. It was a big help and of great use. But, as time passed she felt the competition in this business. She decided to sell her motocarros and invest in a new business, renting rooms in her house. She currently has one motocarro that she got by selling her previous motocarros after about one year of use. She plans on using her next loan from Edaprospo on the construction of her house in order to make the people who want to rent a room more comfortable. What she has in mind is having a comfortable house to give her family a better quality of life. She also wants to give her children a good education so that they will become good professionals. These are plans for the future, and she is sure she will accomplish them.