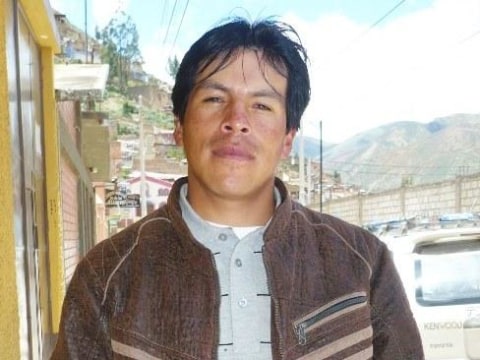 Wilmer is 30 years old and a loving responsible father. He lives independently at the home of his parents with his wife Damiana (age 29) and their beloved daughter Milagros (age 7). They hope to provide her a better life.

From a young age, Wilmer learned from his parents how to work on a farm. Every day he helped them with their work since he was conscious that his family’s welfare depended on it. He currently has his own land that he has cultivated with great success since now the welfare of his wife and daughter depend on his work. What he enjoys most about his job is looking after his crops and feeling extremely happy when his harvests are large and abundant. Wilmer has been farming for 18 years and considers the most difficult part to be hauling his produce to the market in the city of Tarma, the place where he sells them. Later on, he wants to buy additional land so that he can increase his production.

This is his seventh loan with MFP. Wilmer knows he has to submit all of his payments on time and is inclined to do so because he does not want to cause problems for his Communal Bank. He is a very supportive and responsible member. With his loan of 3000 PEN, Wilmer will buy seeds for planting potatoes and peas since these products have been selling well in recent months.