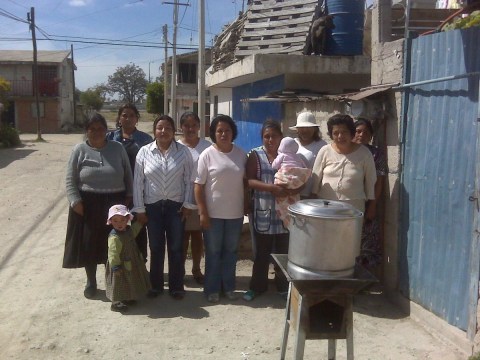 A loan helped To buy a tricycle (three-wheel delivery cart).

This group is called “Violetas” (Violets) because the members identify with these beautiful flowers. It is located in the Casa Blanca community, Puebla, México. It is composed of 11 women and this is their second loan request. Victoria M. Z., 41, is the group president. She finished middle school and is in catalogue shoe sales. She has a 5-year-old daughter that depends on her and her husband has been a mechanic for 6 years. Her customers are of the opinion that Vicky is a woman who likes to get ahead; she is an independent, enterprising woman who seeks a better life for her family; her goal in life is to provide a good education for her daughter so that she won’t suffer through the needs she, herself, has endured in the past. She is requesting funds to buy a block of shoes to fill her pending orders. Flora C. M., 21, is married and has two children, who are 2 and 3 years old. Her husband is a construction worker. She only finished elementary school and has been making home-made tamales to sell for the last 3 years. She learned how to make tamales following her grandmother’s recipe so they have a homey flavor. She wants funds to buy a tricycle (three-wheel delivery cart) that will make it possible for her to transport her product from where she makes the tamales to sales locations that are farther away. Her customers know her as being a young, enterprising woman who, at the moment of asking for this loan, is happy about the trust that was placed on her by her fellow group members despite her youth. Success, for her, is providing a better education for her children so that they won’t suffer through the same needs she did as a child. The other group members are: JUANA FLORES V. T. – Sells cosmetics BEATRIZ DIANA G. S. – Sells cosmetics ANA MIRIAM G. A. - Sells cosmetics ROSAURA H. G. - Sells cosmetics MARIA ANTONIETA J. M. - Sells cosmetics MARIA DEL CARMEN L. J. – Sells typical Mexican fast-food SUYAPA M. O. – Sells silver JOSEFINA R. QUIZAMON – Shoe sales MARTINA N. C. - Shoe sales