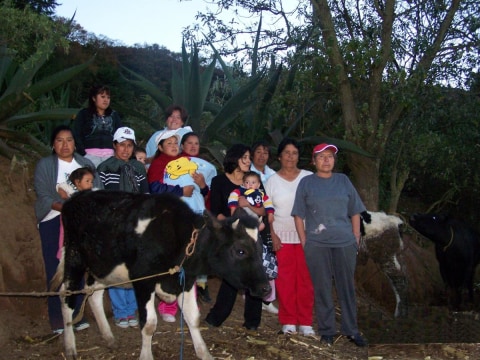 A loan helped To raise calves.

This group is called “El Esfuerzo de San Felipe” (San Felipe’s Effort) because that’s the name of the place it was formed and the members state that it will be their union of efforts. It is located in the Felipe Coamango community, Chapa de Mota municipality, Estado de México, México. It has 10 members and this is their first loan request to CrediComún. Zenaida L. González, 26, is group president. She finished 6th grade and is a housewife and a merchant. She has 4 children. She has sold cosmetics for the last 2 years; she also raises chickens and turkeys. She is asking for funds to stock up on cosmetics and perfumes to sell. Zenaida C. E., 47, is a group member. She finished 6th grade, is a housewife and farmer. She has 7 children; 3 girls and 4 boys, all of whom are married. She has raised calves for the last 8 years. She is asking for funds to buy feed and pasturage for the calves she already has and, once they reach proper weight, sell them and buy new ones to raise and continue with the business. At the moment of asking for this loan, she feels motivated and supported because she’s a new open door. She wants this loan to fatten up her calves and help her business to grow. She has always raised animals and considers this to be a profitable business because she has made profits from them that have made it possible for her to buy chickens and turkeys, which have been life savers sometimes and they have always been a sure source of nourishment for her family so that food has never been lacking. Similarly, she has bought donkeys that she uses to transport cargo because, without them, the work would be much too heavy. In addition, she has been able to invest in home improvements thus improving her quality of life. She hopes that her equity will continue to grow so that someday, when she and her husband are no longer able to work, they will have a bit of savings put away to live with dignity. The other members of the group are: - Ana Rosario López C. (Sale of napkins and embroidery) - Rigoberta López C. (Raises chickens) - Josefina García Alcántara (Catalogue shoe sales) - Asunción Alcántara C. (Sells prepared meals) - Rosalba Velázquez C. (Clothing sales) - Ysidra Z. M. (Clothing sales) - Ana Cristina C. B. (Sale of cooking utensils) - Adriana López C. (Handicrafts sales)