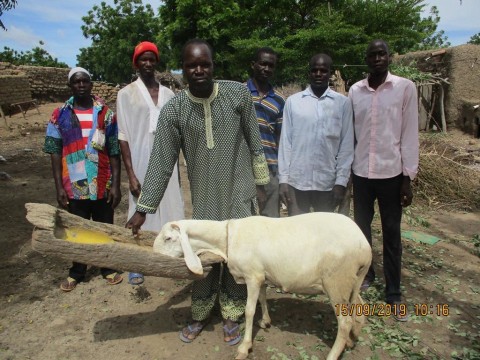 A loan helped to buy cattle to resell in order to construct brick buildings for his children.

Souleymane is the man holding the bull's horn in front of the members of his group. He is 46 years old and father of 12 children, six of whom attend school. His children range in age from four months to 22 years. He has been fattening cattle for more than seven years now. His wife, in addition to maintaining the house, earns a living doing business. With his RMCR loan, he buys and resells cattle at local fairs.

The help of RMCR contribues a lot to the expansion of his business. Through the profits generated, the loan helps to take care of the schooling of his children.

He has dreams and hopes for the future: being able to save, constructing brick buildings, and an animal park for his children. He has a good reputation in the area and is literate.

The main obstacles that Souleymane encounters in his business are poor rainfall and often the death of animals.