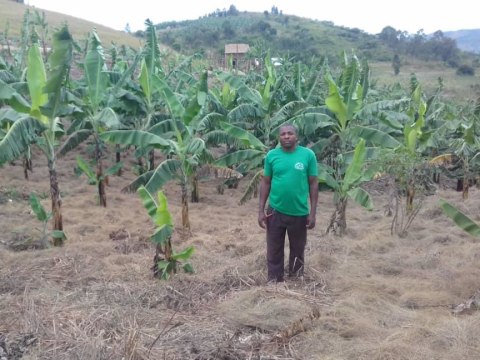 A loan helped to buy organic weed killers and fertilizer to improve his yields.

Yasini is married with three children, all of whom attend school.

He is in farming, specializing in banana growing, to raise income for his family's survival and also ensure food security at home. He works for 6 days a week because he believes that the more care he gives the farm, the more yields of good quality he harvests.

Yasini is challenged with the weed outbreak in his garden which has created a big threat to his crops, including competition for mineral nutrients which reduces crop growth and production. Weeds also harbor insects, pests and diseases which cause heavy losses in the crop yields.

In a bid to save his farm, he has applied for his second loan of 1,500,000 UGX from UGAFODE to buy organic weed killers and fertilizer for his plantation. He is optimistic that his crop productivity will increase, thus bringing in more returns.

Yasini is grateful for the financial support that will improve his farming.