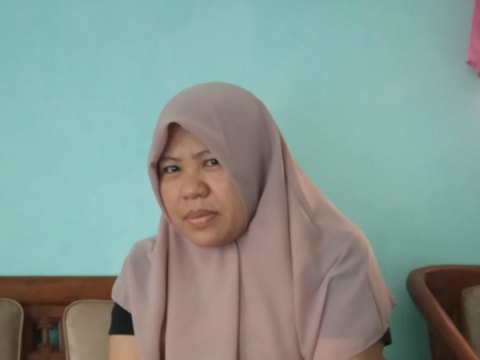 A loan helped to obtain 270 water filters to sell to her fellow villagers, thereby providing them with safe drinking water.

Mrs. Lia is the mother of two children and lives in Pakis, Malang Regency on The Island of Java, the main island of Indonesia.

In Indonesia, you cannot drink from the tap and most people don't even have a tap. For that reason, most inhabitants of Indonesian boil the water before they drink it. Or, if they have they money, they buy bottled water.

Mrs. Lia heard of a new option for disinfecting water when the promotion crew from Nazava Water Filters held a safe water training in her vicinity. Nazava Water Filters filter well, rain, and city water so it becomes safe to drink without boiling and without using fuel or electricity.

Mrs. Lia, who is also a health worker, took the opportunity and became the reseller of Nazava Water Filters in her community. This is the sixth time Mrs. Lia has applied for a loan. She has an excellent record in repaying her loans.

This loan will allow Mrs. Lia to buy 270 filters and sell them on credit to her community, thereby making safe drinking water available to 1350 people.