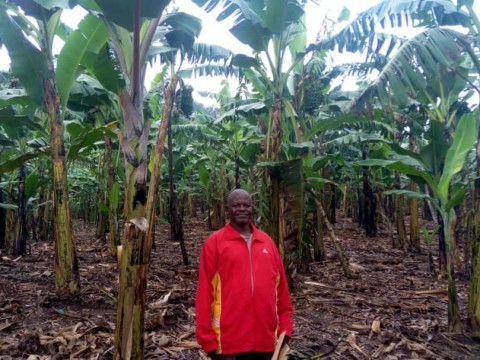 Hannington.'s loan finished fundraising, but these other borrowers need your support

A loan helped purchase organic manure and mulch for his banana plantation.

Hannington was born in Kibuba Ndeija Rwampara in a remote area that is predominantly known for subsistence farming. He lost his wife in 1994, and since then he has not remarried because his aim was to take care of his children and make sure that they are all educated, something that he is doing well though he has faced a lot of challenges. He works with all of his children on the farm when its holiday time to raise money for school fees.

He has just joined UGAFODE; he was referred by his neighbor to get money and add manure for the banana plantation so that he can increase yields. Currently, he has a loan of three million UGX that was used to buy manure and mulch the banana plantation with hopes of producing more than 200 bunches per month.

Thank you for your kind support.