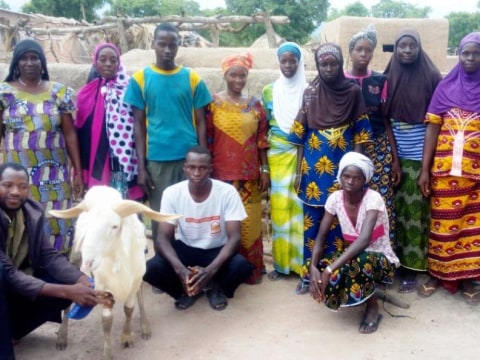 A loan helped to buy rams to resell with the goal of improving his family's living situation.

Karamoko is pictured holding the ram's leg in the group photo. He is a livestock farmer (he raises sheep during the holiday of Eid) living in Mali. He is 36 years old, married, and the father of three children who all attend school. He was educated in the national language. His wife is a housekeeper.

Karamoko buys and sells his animals at local fairs. After a sale, he can make a profit of between 50,000 and 75,000 F during 8 months. He has been working in this capacity for five years. The profit he makes enables him to take care of medical bills, as well as feed and clothe his family.

He is counting on financial backing from RMCR such that he can buy many animals and eradicate his poverty. This will ameliorate his living conditions and those of his family.