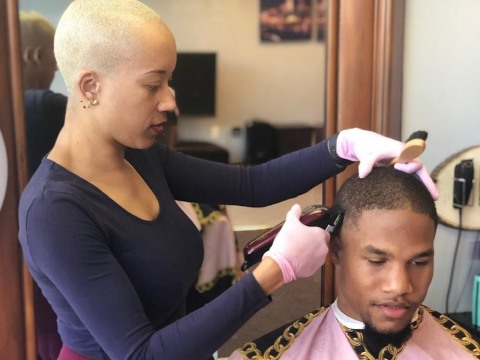 A loan helped to finish a personal room including equipment in the barbershop that will allow clients who are experiencing hair loss to have their services and treatments done in privacy rather than in the space of others.

I started cutting hair professionally about 10 years ago. The first few years, I wasn’t sure if I even wanted to be a barber, however, as a single mother, I realized that the flexibility it gave me was important when my youngest son got sick and my grandmother developed dementia. Growing up in Philadelphia, when my younger brother needed a haircut, I found a pair of clippers under the bathroom sink and soon became his barber. I was 13 years old at that point. At 16, I got a job at a barbershop. I never even thought about actually being a barber, because all the barbers were men and I assumed it would never work. Eventually, I stopped working at the shop and went on with life. In 2000, I moved to Pittsburgh and worked part-time as a barber at my aunt’s shop, The Barbers Inn. At the same time, I was attending school and in 2002 earned an Associates Degree as a Medical Assistant. For about three years I pulled away from barbering and focused on a career in the medical field. However, in 2006 my youngest became ill and my FMLA had run out, so I went back to barbering full time, mainly because of the flexible schedule, and I made good money.