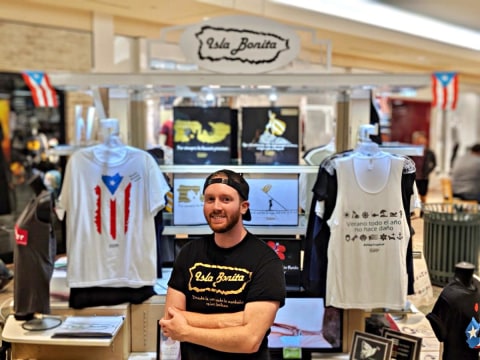 Emmanuel's loan finished fundraising, but these other borrowers need your support

A loan helped to acquire new equipment and supplies to make our own products so we can help more communities on the island.

Everything really started a week after Hurricane Maria, on September, 2017. I saw so much sadness and devastation on the island that I commenced by creating some t-shirt designs to raise funds so we could help the most affected communities on the inner part of Puerto Rico. At the same time, I wanted to raise awareness about resilience, about rising up, that Puerto Ricans could overcome all the negative stuff that were going through after a big natural event of that kind. I wanted for people to remember that our island will always be beautiful no matter the bad things that happen. With the initial funds raised we helped more than a 100 families throughout the island at the towns that were most affected and difficult to reach. We brought them first-necessity materials, water, and food so they could feel relieved for a period of time while everything slowly started to get back to normal. There were communities that undergo months (or even more than a year) without water and electricity after hurricane Maria. We also brought them a little bit of joy and happiness with some carol songs during the first Christmas after the natural disaster. After we saw the great support of many Puerto Ricans and visitors, we decided to keep our job on maintaining the feeling of pride, strength and hope both inside and outside the island. New collections of shirts were launched and we noticed that we were keeping an indirect connection between families that were broken apart after the hurricane because they were looking for new jobs or education on the main land of the United States.