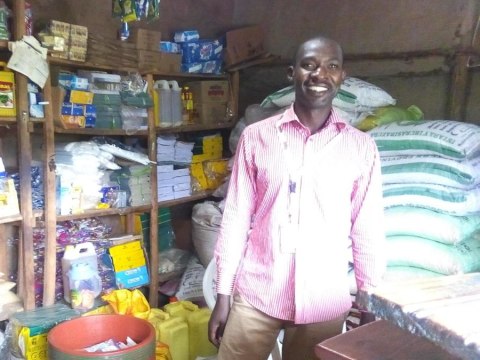 A loan helped to buy wholesale stock to increase the product offerings in his shop in a refugee camp.

Sebukwangali is a young entrepreneur with a clever mind and knack for understanding his clientele. In 2014, he launched a general store in his community selling items that were the most in demand within the refugee camp. He recently also began offering money transfer services to increase his income. Though his shop started small, with the money transfer services and his continued growth in popularity, he now operates in over seven different locations. His sales and savvy business skills are strong because he really understands what his fellow refugee neighbors want.

Sebukwangali has applied for a loan that he will use to buy wholesale items for his shop so that he can continue to meet his customers' demands and grow his business.

Sebukwangali came to Rwanda with his wife and five children after they were forced to leave their home due to the insecurity and resurgence of war. He hopes to become a business guru so that he can improve the lives of his family, and he has already demonstrated an aptitude for success in his business.