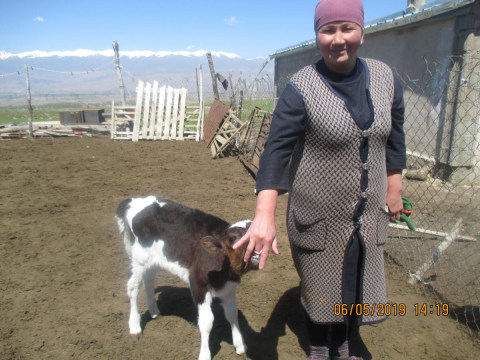 A loan helped to buy a dairy cow to increase cattle headcount and sales of organic milk.

Bulzat si 48 years old, married and the mother of 3 children. Bulzat has a secondary education. She is engaged in animal rearing and crop farming as a primary source of income for her family. Neighbors describe Bulzat as a cheerful, honest and hard-working woman.

Thanks to her hard work and her spouse's help with the farm, Bulzat currently has 5 cows, 400 sheep and 10 horses, as well as 1.92 hectares of land where she grows beans.

Bulzat has a contract with a local dairy-processing plant to supply organic milk. This allows her to continuously invest into her farming business. Having learnt that Bai Tushum Bank has a 'Value-Added Chain' scheme under which she is able to get a loan using her supply contract as a collateral, Bulzat once again decided to apply for a loan in the sum of 70,000 som (KGS) to purchase a dairy cow in order to increase her cattle headcount and sales of organic milk.

Payments for the milk will be transferred by the plant directly to Bulzat's bank account and her loan repayments will be automatically deducted. The proceeds from a loan will help Bulzat to further increase her livestock headcount, improve her family's welfare and provide good education to her children.