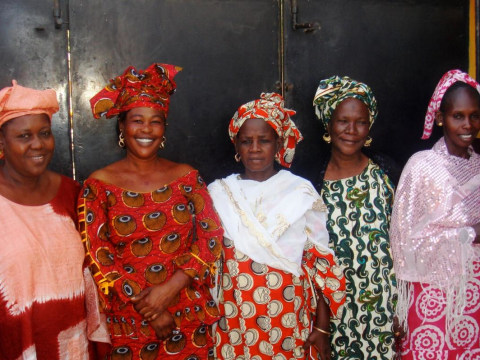 A loan helped re-stock their businesses.

"Jappo Liggey" (translated: Working Hand in Hand) is a women's group consisting of five women merchants who all live in the Angle Serigne Fallou neighborhood of Thiès, a town situated 70 km from Dakar. This group was formed just one year ago and is led by the oldest member, Mrs. Mame Dior M., who was born in 1949. In order to bolster their businesses, the members of this group would like a loan of 500,000 F CFA of which they are going to receive equal shares.

Mrs. Mame Dior M., the mother of 8 young women, is an energetic lady. She has been working as a merchant for more than 40 years and has even managed to buy a house out of the profits from her business. However, with her share of this loan, 100,000 F CFA, she plans to buy various items for her business. She wants to buy melons harvested by the project "Great Agricultural Campaign for Food and Abundance" which was instituted by President Abdoulaye Wade to expand agriculture and address the issue of food security. This investment of Mrs. M. will allow her to bolster her little business and increase her profit.

As for the other members of the group, they are: Mrs. Rama N. who has been serving cooked food in her neighborhood for 18 years, Mrs. Aminata D. who has been selling roasted peanuts and fruit at the elementary school for 20 years, Mrs. Ramatoulaye M., who sells cooked food outside a high school in town, and Mrs. Mame Néné D. who sells sandwiches, juice, clothing, and shoes in her neighborhood.