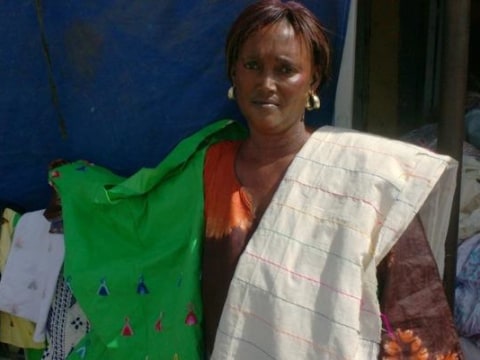 A loan helped To purchase a large stock of fabrics.

Selbe T. is involved in buying and selling fabrics, a very common business among Senegalese women. Senegal and neighboring Mali, Mauritania and Gambia produce beautiful traditional fabrics, which are often in high demand, especially before important holidays. Ms. T. was introduced to the trade by one of her older sisters. As she is single and does not have children of her own, her income helps support her large extended family.
With her loan of 300,000 XOF she will purchase a large stock of fabrics. With the future revenues from her business, she hopes to open her own proper shop in the main market.
Ms. T. lives in the Ndayene neighborhood of Diourbel, a town of some 100,000 inhabitants, which shares its name with the larger Diourbel region. The region has around two million inhabitants, and inclues Senegal's second largest city, Touba. Before colonization, the region was known as the Bawol kingdom, and inhabitants are still often called Bawol-Bawol.