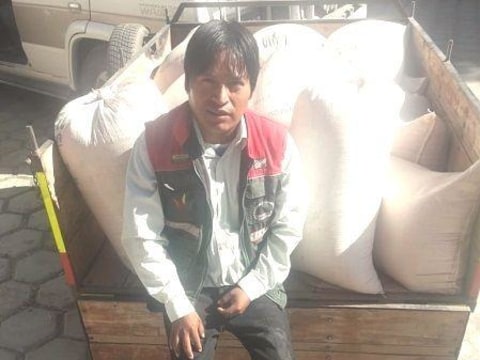 A loan helped to buy merchandise (quinoa) to sell at local fairs and markets.

Adalid is 33, single, and currently has no children. He lives in a family home in the municipality of Challapata in the province of Aroma located in the city of Oruro, Bolivia.

Adalid is a hard worker and has been engaged in the quinoa trade for six years. In the Bolivian highlands, the agricultural production takes place at altitudes that exceed 4,000 meters above sea level, in an extreme climate characterized by drought, frost, and other adverse factors. In these conditions only one crop flourishes: quinoa (Chenopodium quinoa Willd). It is the main source of food for the population of the Andean highlands, which has survived for thousands of years thanks to this nutritious food. Production for the international market began in 1983, when the National Association of Quinoa Producers of Bolivia was established.

Adalid works on Saturdays and Sundays from 8:00 in the morning until 6:00 in the afternoon, selling quinoa at the local fairs and markets.

This is the first time that Adalid is requesting a bank loan and requested it from Fundación Sartawi with the objective of being able to increase his capital to buy merchandise (quinoa).

Adalid is grateful to all the lenders who will help him achieve this goal and who have confidence in him.