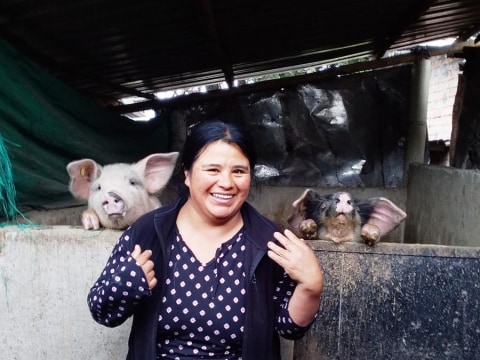 Diana Paola's loan finished fundraising, but these other borrowers need your support

A loan helped to buy pigs, chickens and feed for them.

Paola is 33 years old. She is a cheerful, hard-working and optimistic young woman who lives in the rural community of el Capuli, She is in a relationship with Echo and has two children, a seven year old girl and a five month old baby. Her partner is a driver.

Paola worked in a food association where she was the victim of an injustice being hired as they didn't want to give her maternal benefits. So she was without work for five months. In order to get ahead she decided to expand her work raising animals which she has been doing for five years.

Paola has come to request the support of a loan so she can increase [the number of] her pigs and chickens. Selling them she can obtain her own income for the household and her own expenses. In the future she wants to make improvements on her house ultimately improving the family's quality of living.