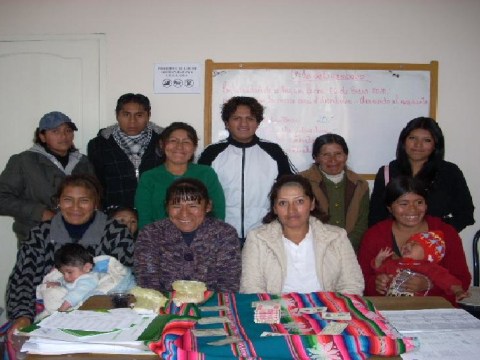 Perlitas Blancas Group's loan finished fundraising, but these other borrowers need your support

The Perlitas Blancas Community Bank is made up of ten people who belong to the Pampahasi zone which is located around SAMAPA (a water company). The members are dedicated to selling perfumes, cell phones, baked goods, food, liquor, etc. This group of members is entering its second cycle as a community bank during which time they have proved to be people who are responsible with their repayments. For Maria, this is her second loan. She fills the roll of group president and is the leader. She is also the bank's founder. Maria is dedicated to selling beauty products. She is married and has three children. Her husband works as a minibus union rep. He has two children who are school age. This loan will be invested in the purchase of merchandise and used to be able to enhance their merchandise. During the time the loan was made, they invested in the purchase of merchandise and, in this manner, increased their capital. During her tenure with her group colleagues, she has shown to be a person who is united with her colleagues, always helping them to get ahead with their work, successful with their repayments, and strict with her colleagues at payment time. Alan is currently working on his second round (of loans). In this round, he has taken the role of group secretary. Alan is dedicated to tailoring, like his mother, and has a shop in his home. Additionally, he studies at night. During his tenure with the group, he has proven to be responsible with his repayments as well as with his colleagues at repayment time. The loans obtained from our institution were invested in the purchase of raw materials for the shop, since at this time, he has more orders. He is a single member and does not have children. His wish is to be able to start his own tailor company so he may support his mother. Jheovany is a new member who joined after being invited by another member to participate in the community bank. He is dedicated to driving. The loan that he is requesting was to invest in the purchase of tools. He is single and does not have children. His wish is to be able to buy a vehicle for personal use and another for work and to improve his quality of life. They are thankful to Emprender and to Kiva for the confidence provided by granting the loan.