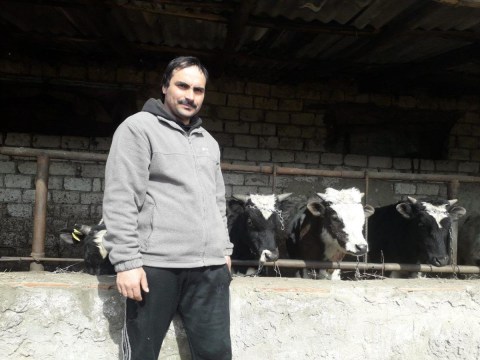 Dumitru's loan finished fundraising, but these other borrowers need your support

A loan helped to purchase cattle and expand the annex.

Dumitru is 34 years old and lives in a village. He is married and has three children. He grew up in a family that were dealing with livestock breeding, pigs and poultry. He has inherited the house from his grandparents and has many animals in his household: a horse, some calves, a cow and some pigs. He works daily at his mini-farm and enjoys the respect in his village.

Dumitru wants to increase the number of cattle he has; at the moment he has 3 calves. Organic meat has a high demand at the moment in the region. Dumitru wants to expand his activity. He is going to buy some more calves and expand the annex of the animals. Dumitru's wife also works occasionally in agriculture and has a little income. Their incomes are modest and rather seasonal: the pig meat, beef and poultry meat sells better in autumn. It is hard for them to realize their dream of having more cattle, so he's decided to use a Kiva credit.

With the credit from Kiva, he wants to increase the number of cattle, buy a new breed that is more resistant to diseases and grows faster. The higher number of cattle in the summer period will make it possible to have more meat for sale in autumn-winter time, which will generate and increase the income of the family.