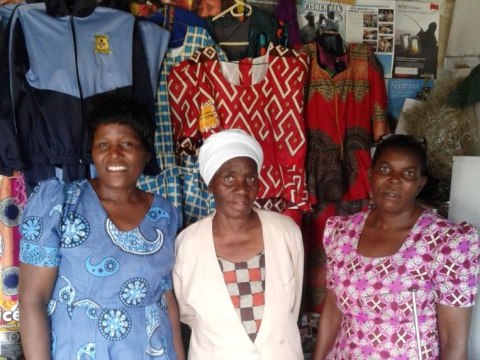 A loan helped to buy 10 roles of uniform materials.

Lilian a 65-year-old married woman who takes care of her 2 grandchildren. Her husband is self-employed as a cobbler.

She is a mentor and a role model that her other group members look up to.

Lilian has built a strong customer base and loyalty especially in local schools. Yearly she secures tenders for uniform sets that mostly for track suits, winter wear and sporting attire.

In peak times, she shares workload and thus help her other mates. Besides uniforms she also makes African attire especially dresses for women.

Her earnings have enabled her to build a grocery shop that she rents out at Domboshava show grounds and thus widening her income stream. She is passionate for success and self-motivated in achieving her goals.

They came to Thrive and formed a group named Superior Group which is currently on its 5th loan cycle. Lilian used her portion to buy 10 roles of uniform materials that pushed her forward in sewing more uniforms as to meet demand.