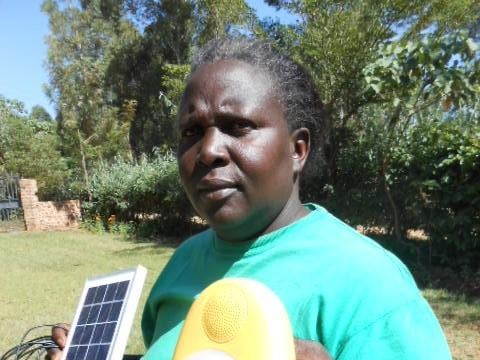 A loan helped to buy cost efficient maize seeds and fertilizer for the coming harvest season, and a solar light.

Hildergard is 52 years old and has four children. She is a group leader and is representing her group formed by seven farmers in Kakamega B (North) District, Kenya.

Hildergard has been farming with One Acre Fund for years now, having joined the program for the first time in 2010. This decision was largely a result of her desire to have access to quality training and acquire new farming methods and, although she described her last harvest as poor due to bad weather conditions, she believes she could have a better one this year by continuing to work alongside One Acre Fund. Hildergard also decided to purchase a solar light as part of her loan, which she is very excited about, as it will allow her to have light during dark hours for her children to be able to study.

Obtaining this loan means that Hildergard's Group will be able to receive a total of four solar lights, as well as farming inputs to plant a total of 3.75 acres.