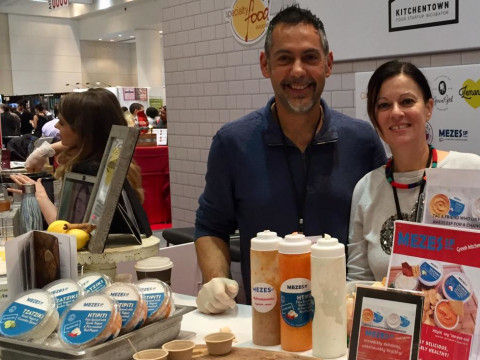 A loan helped fund the purchase of a larger capacity Robot Coupe and an automatic filler to increase our in-house production.

I started my Chef career in 2000 in San Francisco. Being raised in Greece and having studied in California, I wanted to introduce to the Bay Area the Greek flavors and spices I grew up with as a child. From this vision came MEZES Greek kitchen, a modern Greek Taverna located in the San Francisco Marina district, where I developed my concept of small plates meant to share (the meaning of “mezes” in Greek). Mezes Greek Kitchen soon became a favorite spot among locals. Over the course of 17 years, I witnessed firsthand how I was able to bring joy to people's life with my cooking! In 2016, I started focusing on the idea that I could make my food available to a larger number of people by branching out to making food directly for grocery stores and farmers' markets. I had always been puzzled by the fact that people were paying more attention to the meals they were eating than the way they were snacking. I decided to focus on bringing to market better-quality snacks with my fresh Greek dips! In 2017, I transitioned from the restaurant scene and created MEZESsf Greek spreads. I started with 2 products, a Tzatziki dip which is a creamy Greek yogurt-based dip with fresh cucumber and dill and a Htipiti spread (pronounce Tee-pee-tee) which is a Feta-based spread with fire roasted Red Pepper. I am now working on bringing to market a vegan eggplant caviar spread. Our spreads are not only delicious and irresistible but also non-GMO, gluten Free, have no-added sugar, no-added preservatives. My goal is to demonstrate to people that snack can be both fun and healthy to eat! My biggest hope is that MEZESsf spreads will come to replace the traditional industrialized dips packed with added sugar and preservatives.