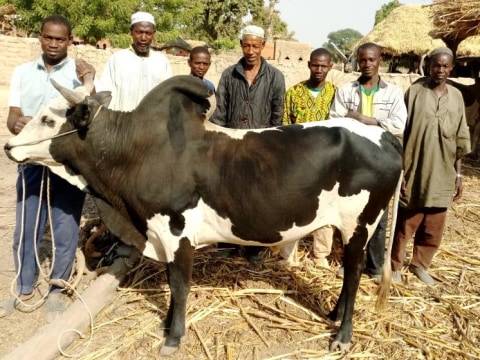 A loan helped to buy oxen to resell as well as building a pen.

Madany is the one with the rope of the ox in his hands. Madany is a 48 year old Malian ram and beef farmer. He is married, father of two children aged 8 to 18 years old. His wife is a housewife. He gets his supplies and sells his animals at weekly fairs in his area.
After the sale, he can have profits that vary between 100,000 to 150,000 XOF.
He has been doing this work for six years. His income allows him to cover the medical expenses, clothing, schooling of his children, and the stabilization of his family's food security. But often he encounters a major difficulty in his business, which is the fall in prices of animals at the markets.
Madany is counting on increased support from the R.M.C.R. so that he can build a large pen and buy a lot of animals to develop his business and eradicate his poverty and improve his living conditions in his family.