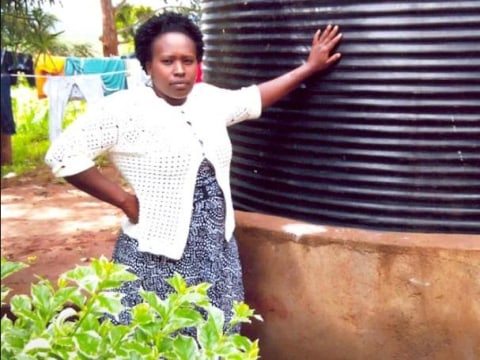 Rachael's loan finished fundraising, but these other borrowers need your support

A loan helped to buy farm inputs, such as seeds and nutrient-rich fertilizers, to expand her farm crop to make more profits for her family.

To achieve a great milestone in farming, Rachael has had to pass through many ups and downs. However, she is always successful. She is a humble woman who works hard to establish herself. Her major source of income is selling her farm produce, such as crops and milk.

Although Rachael has been earning some income from her farm, not everything has been easy for this enterprising woman. Her farm’s produce has reduced due to a lack of fertilizer and failure to use quality seeds and nutrient-rich fertilizers. One objective that Juhudi Kilimo aims at fulfilling is increasing the ease of accessing farm inputs and income-generating assets for farmers. Through the intervention of Juhudi Kilimo and Kiva, inputs such as fertilizers and pesticides have become more accessible to its members.

Rachael is seeking a loan of KES 100,000 to buy farm inputs, such as seeds and nutrient-rich fertilizers, to expand her farm. Through this loan, Rachael will be assured of a bump in her harvest, which will mean more profits and income. Using this loan, she will be able to expand her enterprise.

Rachael hopes you will consider her request for this loan. It will change her life and help her achieve her dreams.