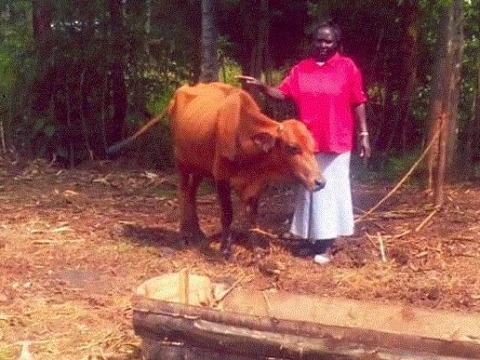 Esther's loan finished fundraising, but these other borrowers need your support

A loan helped to buy farm inputs such as seeds to help a widow who is the only hope for her children.

This is Esther, a widow, who is a picture of beauty and has a captivating smile. Esther is the true definition of a hard worker and a happy mother. She is a farmer in Kitale, an area endowed with natural streams. She grows maize and vegetables, raises poultry, and engages in dairy farming, producing milk and eggs for commercial purposes as opposed to many rural farmers who produce only for subsistence.

Esther also grows maize for food and sales. These commercial activities place her in a better position to engage in other agricultural businesses, which she also does. Esther is humbly on her knees seeking a loan to buy farm inputs such as seeds, to help her expand her horticultural farm. She is very hard working and determined to increase her farm's output.

Loans for smallholder farmers, specifically widows with little, irregular income and no solid collateral, are hard to come by in Kenya. A few organizations, such as Juhudi Kilimo, support farmers like Esther. Esther has access to income-generating asset loans from Juhudi Kilimo. Juhudi Kilimo facilitates loans that empower widow smallholder farmers like Esther because the institution believes that widows should also be given fair chances when it comes to financing.