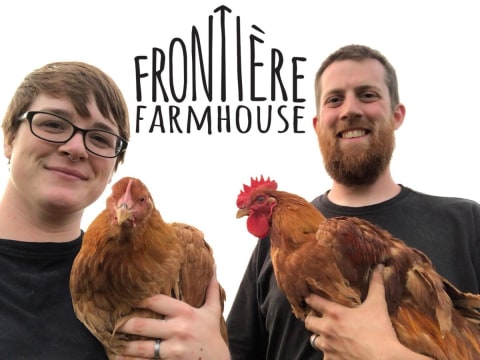 Nicole's loan finished fundraising, but these other borrowers need your support

A loan helped purchase a hoop house to extend our growing season, construct a walk-in cooler to store our harvests before market, and improve our pastured poultry production.

"Frontière" is the French word for border. A border defines the separation between two areas, such as countries. Robert is American, and Nicole is Canadian. We grew up less than an hour away from each other, in cities on opposite sides of the border. We met online in 2014, and knew immediately that we were perfect for each other. In 2016, we were married, and decided to start Frontière Farm House. Robert is a cooking fanatic, and we've discovered that using fresh, local products makes for the best meal possible. We couldn't find many of the herbs and vegetables we wanted, and chose to grow them ourselves. The surplus was sold at the market, and we found others enjoyed our produce just as much as we did. We purchased a home at the end of 2016, and moved in at the beginning of January 2017. Since then, we've been working on getting our home to be exactly what we want, and also improve our land for small scale farming. We have added several hundred feathered residents, as well as more than a dozen ruminants including goats, sheep and camelids. They are well taken care of, and loved by our friends online.