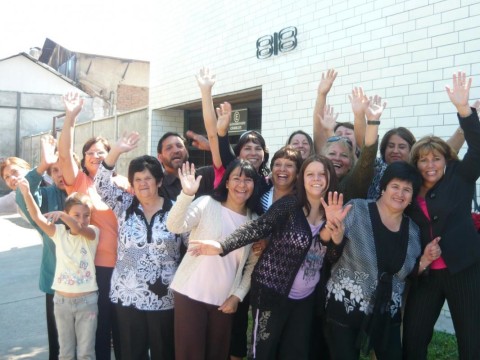 A loan helped To purchase merchandise and supplies.

Village Bank “Mirada de Luz” (View of Light) comprises 17 persevering members from the city of Talca. Talca is a city in the region of Maule, in central Chile. Most Maule residents work in rural areas, where they tend to farms and grow crops. The region is best known for its colonial architecture and artisanal exports, in addition to its wineries. Nevertheless, because the working population there has grown significantly, the region remains one of the poorest in Chile. The main businesses run by the members of this village bank include ceramic work, jewelry making, shoe repair, clothing sales, and dressmaking workshops. Verónica, the founder of village bank “Mirada de Luz,” is pictured above in the first row, wearing black pants and a black shirt. She buys and sells children’s clothing door-to-door. Verónica also sells underwear and cheese, and she makes and sells pearl bracelets. She has two children studying at the university level. Her husband also works at his own independent business because he lost two of his fingers in an accident and had difficulty finding work because of this. Verónica plans to invest her portion of the group loan in merchandise. Her dreams are to grow her business and have a store of her own in the city center, so that she can find economic stability that will help her maintain her quality of life as she ages. For Verónica, Fondo Esperanza and her village bank, “Mirada de Luz,” have been a great moral help in addition to helping her economically.