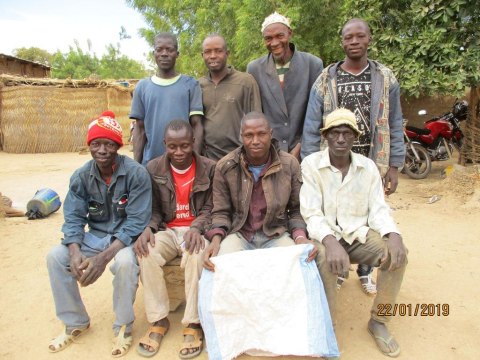 Badeya Group's loan finished fundraising, but these other borrowers need your support

A loan helped to buy livestock to resell in order to support his family.

Broulaye is the man holding the bag with both his hands.
Broulaye is a thirty-five-year-old farmer who also raises livestock. He is married and the father of three children, including one who goes to school, his other two children being not old enough to attend school yet.
Broulaye is a regular customer of RMCR [Kiva's partner in Mali]. Thanks to the previous loans he took out from RMCR, he was able to put his first child to school, buy a motorcycle, build a house with a sheet metal roof and to provide for his family. Broulaye sources his livestock at the largest livestock fair in the region at very affordable prices, which enables him to resell them at the local market of his town at very advantageous prices. He is planning to invest this new loan in raising livestock. The main difficulty in his business lies in the death of some of the cattle after buying them. Broulaye is very satisfied with his partnership with RMCR and he hopes that it will continue in coming years.