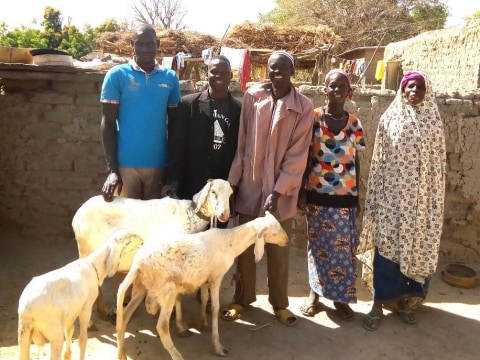 Benkadi N°2 Group's loan finished fundraising, but these other borrowers need your support

A loan helped to buy goats and sheep for resale with the goal of meeting the needs of his family.

Souleymane is the one, among the members of the group, who is holding the goat's horn . He is 54 years old, married and the father of 14 children, between the ages of two and 22, six of whom are in school. His two wives raise sheep and do sales for the well being of the family. Souleymane has been raising sheep for 22 years and stocks up at the weekly fairs in his area. He can earn a projected profit of 25 000F to 30 000F per head. With the sales of the animals he is able to meet the nutritional needs of his family, the medical expenses and the school fees for his children. Today, he owns four head of sheep which he maintains of with a lot of veterinarian care.
He is generous and has a good reputation in his village. Souleymane hopes to have another loan afterwards to expand his business.