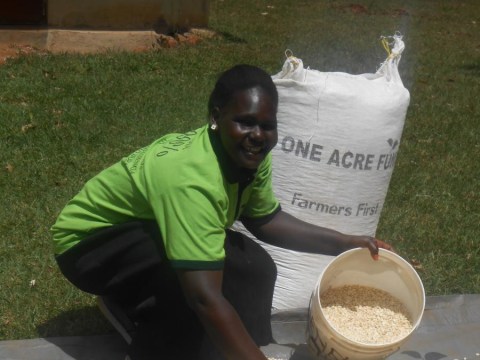 A loan helped to purchase maize seeds and fertilizer, as well as a solar light.

Everline, who appears in the photo, has eight children and is representing her group that consists of eight farmers from Kimilili District, Kenya. She joined One Acre Fund in 2011 and decided to represent her group because she wanted to spread the story of OAF farmers.

With her portion of this loan, Everline will purchase maize seeds and fertilizer for the upcoming crop season, as well as a solar light. Receiving a solar light as part of her loan means that she will now have light during the dark hours so that her children can study. Everline plans to use the profit she earns this year to send her children to school.