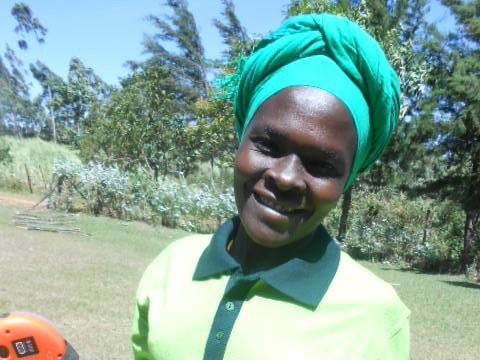 Jael's Group's loan finished fundraising, but these other borrowers need your support

A loan helped to purchase hybrid seeds and fertilizer for the cultivation of maize, as well as three solar lights.

Jael, pictured above, has 6 children and is representing her group, formed by 10 farmers in Webuye District, Kenya. She joined One Acre Fund for the first time in 2006 and decided to represent her group because she wanted to spread the story of One Acre Fund farmers.

With a portion of this loan, Jael will not only purchase maize seeds and fertilizer for the coming harvesting season, but also three solar lights. Receiving three solar lights as part of her loan means that now she will be able to have light during dark hours for her children to be able to study. Jael plans to use the profits she gains this year to send her children to school.

In total, Jael’s Group will use the inputs received from this loan to plant a total of 5.75 acres of land. They will also receive a total of 9 solar lights.