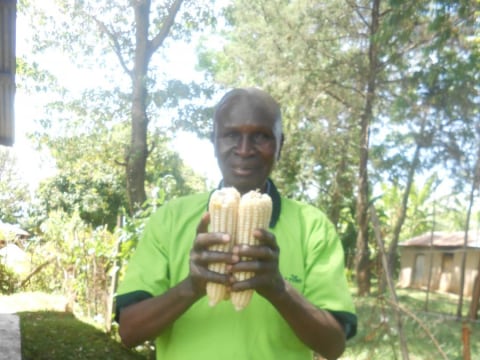 Christopher's Group's loan finished fundraising, but these other borrowers need your support

This season is not the first one that Christopher is working alongside One Acre Fund. He has been a member for a few years now, having joined the program in 2016, and although he is the only person featured in the above picture, he is actually representing his group of five farmers in Kimilili District, Kenya.

Christopher is often described by his community as a very hardworking individual and decided to be the one to represent his group because he wanted to spread the story of One Acre Fund farmers. Like many of his fellow farmers, Christopher decided he wanted to be part of the One Acre Fund community in order to get the best quality fertilizer and hybrid seeds and hopes to use the profits from this year’s harvest to send his children to school.

This loan will not only help Christopher but the whole group, who will receive maize seeds and fertilizer to plant a total of 4 acres of land. Additionally, some of the farmers in the group will be purchasing a solar light so, with this loan, the group will also receive a total of one solar light.