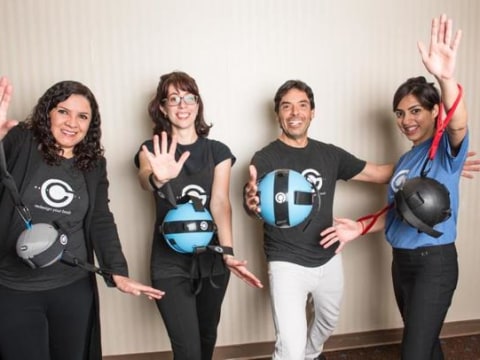 I grew up in Santa Fe, New Mexico as an only child of parents who earned a modest living but always provided me with the necessities. My dad was a devout fitness enthusiast and I spent many hours exercising with him. I decided to apply to medical school. Soon after graduating from medical school, I realized that doctors were trained to treat disease, not how to keep people healthy. By 2012, the stress and long hours of working in the ER had taken their toll. I was 60 lbs overweight, depressed and ashamed of how unhealthy I had become. That year, I quit my job as a full-time ER physician to take back my health. Around the same time my father sustained a devastating nerve injury while undergoing surgery. This injury left him unable to fully close both hands. As I looked for equipment he could use, I was surprised that I couldn’t find anything. I began reflecting back on the many patients I’d seen and realized that many of them had similar problems with weak grip strength. I began work on the Gravity Ball™ and realized the concept of grip-free exercise was a huge opportunity to help millions of people like my father regain the ability to do weighted exercise. In the United States alone there are approximately 100 million people who have problems with grip strength. My mission is to make resistance exercise available to those who currently are unable to exercise because of physical limitations. My journey has brought me face to face with the people who struggle each day and help me to know how beneficial the Gravity Ball can be for millions of people. This exposure has led me and my team to understand the potential for entrepreneurs to have a positive impact on society.