Rally your team! The Kiva Games have begun. Invite your friends and get FREE lending credits. 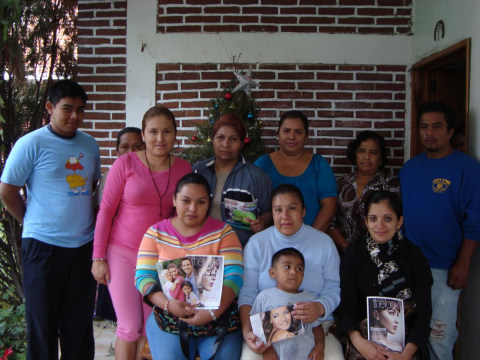 The village of Apataco, which is located approximately 6 km from the city of Cuautl, is part of the municipality of Ayala Morelos. The easiest way to come to that place is to go straight ahead on Avenida del Señor del Pueblo. The community of Cuahuixtla, which belongs to the village bank "La Unión del Progreso", is situated right behind the Apatlaco bridge. Their members are known for the punctuality of their repayments. All the members of the village bank are active in trade and services: Mrs Verónica sells protective covers for blenders and washing machines,Mrs Francisca Díaz prepares pickled peppers and nopal salads,Doña Margarita sells via catalog and also sells buñuelos,Nohemi is a manager with the cosmetics company Mary Kay and also sells via catalog,Flor sells via catalog and some groceries when there are bargains in the store where she works,Carlos, Genoveva and Magdalena operate public transport minibuses,Sofía and Erika sell via catalog,Erick sells nutrition products from Herbalife, and finallyLeticia B. B. sells via catalog; a detailed account of her story follows. Leticia initially was a member of a loan group to which she and her mother were invited. The group was created, but had problems with the repayments. There was some fighting, but finally the loan was repaid. Leticia waited for two months and then informed the microfinance institution that she wanted to set up a new group with other members. This group was created and is now in its third loan cycle. Leticia's share of the loan amounts to 8,000 pesos, which she will invest in her store where she has a highly diversified inventory: sportswear, perfume, creams, lingerie, etc. She is married and the mother of two sons: one is in fourth grade and the other is four months old. She told us that when she married, she suffered a lot. The reason is that she had been working since she was very young and she liked having her own money. However, when she married, everything became different, because her husband would not let her continue selling. There was a time when her husband was in the United States. She grasped the opportunity to open a store and sold anything she could. When her husband informed her that he was about to come home, she got rid of her entire inventory, so that he shouldn't notice anything. But soon he learnt the truth and had a fight with her. Finally, they talked about it and he understood that her contribution might help him to support his sons and give them everything they were entitled to. Finally Leticia thanked our microfinance institution for its support and continued lending. She was able to continue her business, because at times she did not have the necessary resources to restock her store. She used the loans to reach her goal and be able to keep selling her merchandise. She is grateful to Kiva to trust our microfinance institution and to give the lenders the opportunity to get to know the institution and the entrepreneurs through this interview and this picture.