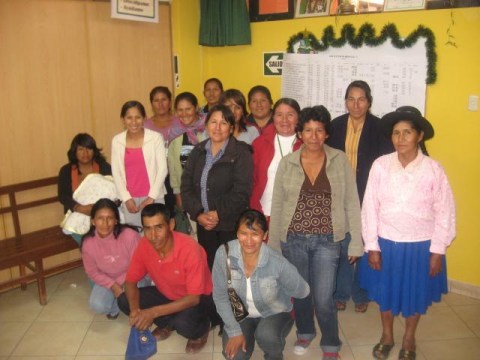 The Gotitas D. Amor Communal Bank starts its fourth cycle with 16 members. The members have different businesses like selling grains, cell phones, general groceries, clothes, cosmetics, and sweets. Some also proviD. shoe repair and Internet services. Like the case of Irma. She is 50, married, and has three children. She travels to different fairs where they sell groceries. She buys grains and cheese, which she sells door to door. Maria is 45, married and has three children. Maria sells second hand clothes that she buys in the city of Lima. She sells in the Tambo district, where she buys grains to sell in the Abastos Market. The members need loans of different amounts like 300 PEN, 450 PEN, 600 PEN, and 900 PEN. The total for the loan to the communal bank is 9,600 PEN. The loans will be used to buy wheat, barley, quinoa, second hand clothes, cosmetics, cheese, and cell phones. The members’ dreams are to improve their businesses, that their children succeed and become professionals, to have savings for their old age, and to have their own houses.