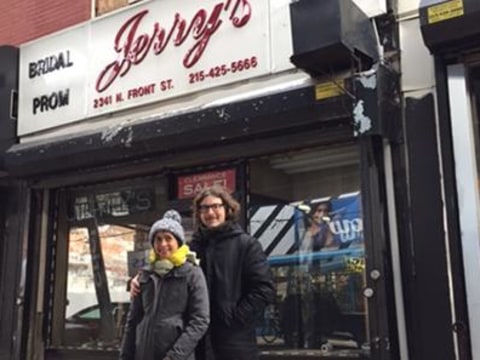 Maria & Chris's loan finished fundraising, but these other borrowers need your support

A loan helped provide needed capital investment to expand Jerry's On Front, our music rehearsal studio business, to a second location where we will build 10-12 new studios.

I grew up in the Philippines and immigrated to the United States with my parents and 3 of my 6 siblings at the age of 13. After attending college at Rutgers University, where NJ native Chris and I met, I earned my BFA at Hunter College in New York City, where we lived from the mid-90s until moving to Philadelphia in 2009. Upon moving here, Chris and I both quickly involved ourselves in the local art and music communities in Philadelphia. One thing that we noticed in our time in NYC and saw happening in Philly, was a rapid rate of gentrification that began with artists moving to a neighborhood for affordable space and culminated in the artists and longtime residents of those communities being priced out of housing as well as commercial spaces by largely uninhibited development. If anything, my experience as an immigrant has given me the feeling of being in between cultures, not fully part of one or the other, and as a result I have developed the eye of an outsider. Chris and I love our neighborhood but when local art spaces and music venues were starting to become replaced by vape shops or higher end stores and housing, we felt like it would be important to create something that would keep music and art alive in our neighborhood in a way that would also help insulate the artists from commercial and real estate pressures. It has been remarkably successful! Anyone that comes to Jerrys comments on the community oriented feel that is often missing from other commercial developments. And while we are of course a business, our goal is to recognize and value not only financial capital, but also human capital, cultural capital, creative capital, and make that a core part of our business model.