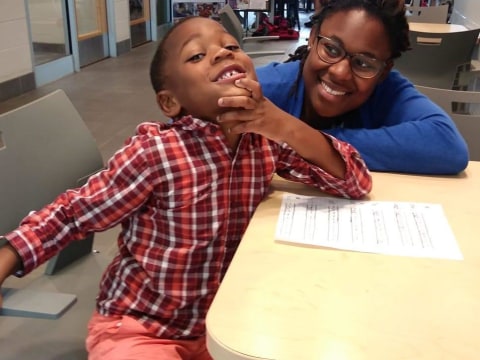 I grew up in Rochester under my grandmother's tutelage. She ran a successful daycare for 30+ years - a daycare where parents loved her, children adored her impending and they all called her grandma, and I knew I wanted that too! I worked by my grandmother's side growing up, and as I got older I started taking jobs with other childcare providers to expand my experience, but I never felt as satisfied or as impactful as I did when working with my grandma. I truly believe it's because the other establishments did not embody the essential tenets of my grandmother's childcare philosophies. Her philosophies of love, honor, respect, and education for all children resound like a roaring sea in everything I do. I began exploring other careers and almost settled on one until I became the proud mother of two bright, bouncing, bold young boys: 5-year-old Mason and 1-year-old Oluwalé. I left my job as a pharmaceutical technician to follow my first love, working with children. In the summer of 2014, I began a summer camp program enrolling 6 children. In between seasons, I took a job as a nanny. Though rewarding, it was very limiting in the number of children I was able to serve. Having the desire to expand my impact, I opened an in-home daycare that filled up very fast. Unfortunately, I did not own that home and lost it to a lost relationship. Nevertheless, I continue passionately caring for children in my community by serving as a dedicated homeschool advocate and tutor.