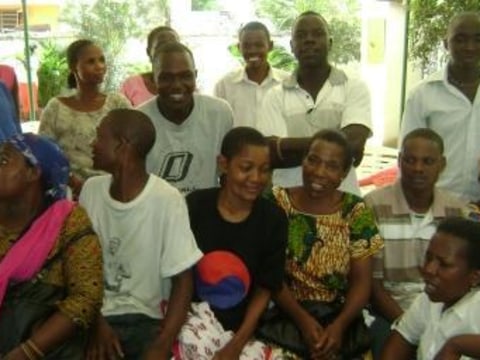 Dar West Group's loan finished fundraising, but these other borrowers need your support

A loan helped To buy more charcoal to sell.

Mambo (greetings) from Dar es Salaam, Tanzania! This is Protas Y., 25 years old and married with two daughters aged four years and 8 months. Protas sells charcoal in the Tabata Mtemba area of Dar es Salaam. He has been in the "mkaa" ("charcoal" in Kiswahili) business for three years. He sells charcoal every day from 8 a.m. until 6 p.m. making a monthly profit of about 100,000 Tanzanian shillings (approximately 75 USD). This will be Protas' second loan from Tujijenge. The first he used to buy household items like cupboards and a radio with a CD player. He hopes to use this loan to increase his stock of charcoal. In the photo, Protas is first on the right wearing a light blue shirt and is shown with the other members of the Dar West loan group. Five of the group members also sell charcoal, while the others run various businesses that include a cafe, a butcher shop, a tailoring shop, a clothing stand, a poultry farm, and a french-fry stand. The members of Dar West are thankful for your support!