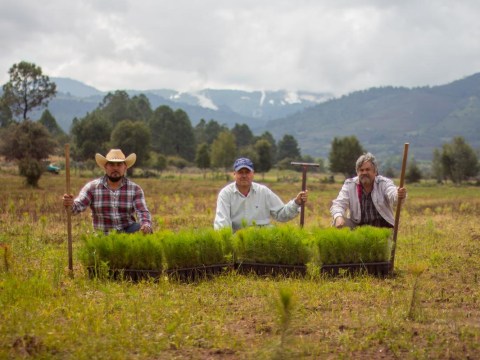 A loan helped to reforest pines to make the most of the resin.

Native of Ucareo, Michoacán, México, Guillermo works as a farmer. He has some fruit orchards to get ahead with his personal expenses. His income is not a lot, but he tries to adapt so that in some way he is able to pay for his necessities.

Although his primary work is agriculture, now Guillermo decided to dedicate his time and effort to reforestation, primarily being a necessity that must be taken care of to help the environment since, regrettably, there is no longer much of what was forest in his childhood. If he does something to improve and recover a bit of what was there, it is worth the effort to dedicate to this work and, for this, he works hard so that more people join the project.

The inhabitants of his community have faced climate changes which have made them think about the necessity to act now. The rain is scarce and the air does not feel as clean as before. For this, it is necessary to make the time and ask for the support of Kiva to be able to really reforest and to continue in an adequate way, so that all their efforts will be reflected in the future in a green forest and a community with social and natural development.