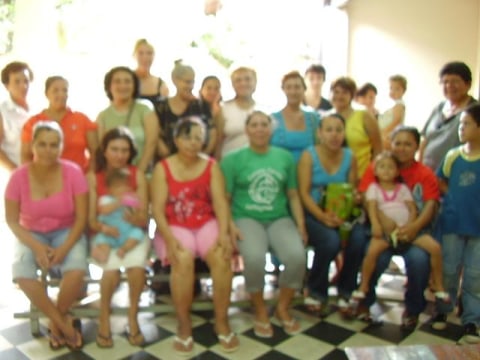 Nuevo Horizonte Group's loan finished fundraising, but these other borrowers need your support

A loan helped Buy items for each of their businesses, such as plants, garden items, clothing, groceries, makeup, etc.

The “Nuevo Horizonte” (New Horizon) Committee was formed a little over 7 months ago in order to access loans and other services offered by the foundation. Several neighbors formed the group as they have known each other for a few years and from there they began meeting every Sunday afternoon. They help each other and together they are learning how to build their Committee. On average they each receive 580952 G, which will be invested in buying articles that will be sold in their respective commercial businesses. Estelvina’s family sells plants as they have the ability to sell since the father works as a gardener in various houses in the city. Today with the loan that they received through the Foundation they were able to open a small nursery on the patio of their house. The nursery has plants from Cabañas city which is 50 km from San Lorenzo. Hopefully with this improvement we can improve our standard of living and that the Foundation will continue helping us as well as other deserving families. 1. Herminia C. sells cosmetics. 2. Olga M. sells lottery tickets. 3. Silvia O. sells food. 4. Gloria M. sells general merchandise. 5. Cristina E. sells turnovers. 6. Margarita S. sells jewelry. 7. Carmen R. is a recycler. 8. Norma B. sells items from Argentina. 9. Estela B. sells clothing, candy, and plants. 10. Severa P. sells food. 11. Lourdes B. sells sells items from Argentina. 12. Estelvina E. sells plants. 13. Sandra B. sells clothing. 14. Francisca M. sells food. 15 Florentina C. sells charcoal. 16 esther R. sells clothing. 17. Elvira M. is a seamstress. 18. Casimira M. sells general merchandise. 19. Marta R. sells plants. 20. Teodora V. sells charcoal. 21. Lilian B. sells underwear.