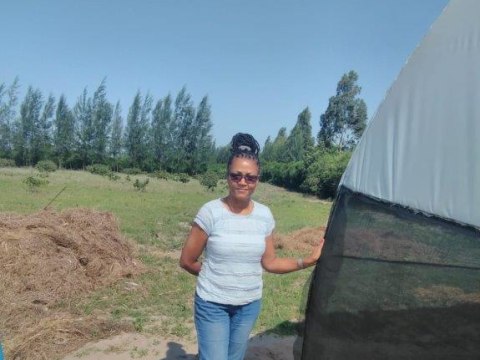 A loan helped to buy a power supply system for pumping water to her greenhouse.

Juliana is 47 years old and lives in the Manhiça district in the South of Mozambique. She has been married for more than 14 years and has two lovely daughters. Juliana is a very hardworking woman, dedicated to her family as well as to God.

Juliana has been working for many years for a non government organization which aims to support children in the poorest communities of Mozambique. Juliana has acquired a greenhouse to develop an agricultural business activity to improve the financial condition of her family as well as to support her community. Many young women can buy her crops and sell them in the rural local market, avoiding the cycle of early marriages as well as unwanted pregnancies in their community due to the lack of opportunities.

However, Juliana's business has been threatened due to the lack of power supply in her community. In the absence of the power supply, Juliana cannot produce in a greenhouse system as there is no electricity for pumping the water to irrigate the crops. If Juliana cannot produce, many young women in her community may become vulnerable due to the lack of honest business opportunities. Thus Juliana hopes to have a Kiva loan to buy a power supply system for pumping water to the greenhouse, so that she can produce her crops during the whole year as well as support the local young women to become financially independent.