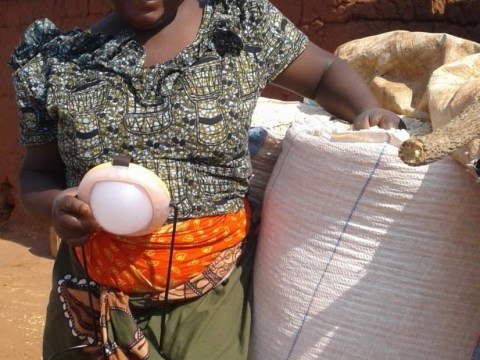 Sara's Group's loan finished fundraising, but these other borrowers need your support

A loan helped to gain access to cost-efficient hybrid seeds and fertilizer for maize cultivation, and also to purchase a solar light.

Sara's Group is formed by eight farmers in the Kilolo North District and is being represented by Sara, who is the group leader pictured above. She is 33 years old and has five children. Sara has been a farmer for 10 years and is often referred to as a very experienced farmer.

Sara isn’t new to One Acre Fund. She actually joined the program in 2015 and has since noticed her life has changed, especially in the sense that she has had more profits from each harvest ever since.

This year, Sara will not only get fertilizer and maize seeds as part of her loan, but will also purchase a solar light. She is very excited about this addition since now she will be able to reduce the consumption of paraffin fuel and therefore save more money.

Using this loan, Sara's Group will purchase a total of three solar lights and use the farming inputs received to plant a total of 7.5 acres.